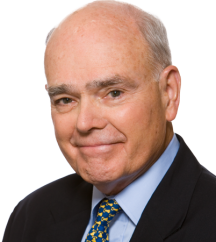 Lee Edwards, distinguished fellow in conservative thought at The Heritage Foundation, is a leading historian of American conservatism and the author or editor of 25 books. Edwards also is adjunct professor of politics at the Catholic University of America and chairman of a foundation that dedicated the Victims of Communism Memorial in Washington, D.C., in 2007. His books include biographies of Ronald Reagan, Barry Goldwater, William F. Buckley, Jr. and Edwin Meese III as well as histories of The Heritage Foundation and the American conservative movement. His works have been translated into Chinese, Japanese, French, Hungarian and Swedish. Edwards’ next book, written with Elizabeth Edwards Spalding, is “A Brief History of the Cold War,” to be published by Regnery in the spring of 2016. Edwards was the founding director of the Institute of Political Journalism at Georgetown University and a fellow at the Institute of Politics at the John F. Kennedy School of Government at Harvard University. He is a past president of the Philadelphia Society and a media fellow at the Hoover Institution. He has appeared frequently on broadcast and cable outlets such as Fox News Channel, CNN, Bloomberg, NBC, PBS, C-SPAN and NPR. His work has been published in The Wall Street Journal, The Boston Globe, Los Angeles Times, National Review, Human Events, Claremont Review of Books and The American Spectator, among other places. His awards and honors include the Order of Merit of the Republic of Hungary, the Millennium Star of Lithuania, the Cross of Terra Mariana of Estonia, the Friendship Medal of Diplomacy from the Republic of China (Taiwan), the John Ashbrook Award, the Reed Irvine Media in Accuracy Award, Legend of YAF from Young America’s Foundation, and the Walter Judd Freedom Award. Edwards received a doctorate in world politics from Catholic University as well as a doctor of humane letters degree from Grove City College. He did graduate work at the Sorbonne in Paris. He also holds a bachelor of arts degree in English from Duke University. He lives in Arlington, Va., with his wife Anne, who assists him in all his writing. [Taken from http://www.heritage.org/staff/lee-edwards]

Lee Edwards: Recovering Civil Society: The Space Between the Individual and the State
2013 | With Liberty and Justice for All: A Critical Reexamination of Social Justice

Lee Edwards: Dissecting Anti-Americanism: The Contribution of Paul Hollander
2012 | America and Her Detractors in the Modern World

Lee Edwards: Dinner – In Honor of the Richard Weaver Fellowship Recipients
2010 | The Ethics of Rhetoric in the Digital Age

Lee Edwards: Roundtable Discussion – The Future of the Conservative Movement
2009 | Back to Basics: Conservative Principles in the 21st Century

Lee Edwards: Lee Edwards “Conservatism in US Foreign Policy”
2006 | The Role of the U.S. in the World Today

Lee Edwards: Lee Edwards, The Heritage Foundation, Dinner Chairman
2003 | To The Republic For Which It Stands

Lee Edwards: Speaker Introduction of Forrest McDonald
2003 | To The Republic For Which It Stands

Lee Edwards: What Have We Learned from Conservative Governance?
2000 | The Conservative Intellectual Movement in the Year 2000

Lee Edwards: The Conscience of a Conservative in the 1990s
1995 | Thinking the Unthinkable: The Successful Challenge to the Welfare State

Lee Edwards: Working With the Media
1990 | Conservatives and the Media #2