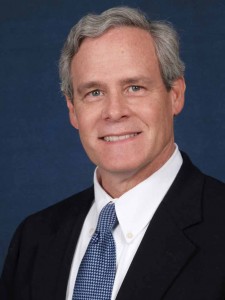 Gleaves Whitney became the first full-time director of Grand Valley State University’s Hauenstein Center for Presidential Studies in 2003. During his tenure, he has been the architect of more than 400 public programs, including four national conferences covered by C-SPAN and four internationally webcast debates — one to more than 3,500 viewers in 18 countries, and another watched on YouTube by nearly two million people in some 30 nations on all six inhabited continents. He has overseen the tremendous growth of the Hauenstein Center’s website, which has been visited more than 30 million times; its original programs have been viewed a cumulative 27 years. He’s also premiered a popular web column called Ask Gleaves — the first presidential Q & A column in the nation — and created a leadership academy for students and young professionals committed to public service. Under his direction, the Hauenstein Center’s Peter C. Cook Leadership Academy has emerged as a preeminent center of leadership excellence in the Midwest. Cook Leadership Fellows have been face-to-face with four U.S. presidents, three first ladies, two vice presidents, four secretaries of state, six state governors, numerous business and nonprofit executives, multiple Pulitzer Prize-winning writers, the world’s most decorated academic, a Grammy Award winner, and a national championship basketball coach. Gleaves graduated with honors from Colorado State University (1980), was elected into the Phi Beta Kappa honor society (1980), and was a Fulbright scholar to then-West Germany (1984-85). His master’s degree and doctoral candidacy were at the University of Michigan, Ann Arbor, where he was a Richard M. Weaver fellow (1987-88) and an H. B. Earhart Fellow (1988-91). He has taught at the University of Michigan, Colorado State University, Droste-Hülshof Gymnasium, Aquinas College, and Grand Valley State University. In 2006, he received the honorary Doctor of Humane Letters from the Graduate Theological Union’s Dominican School of Philosophy and Theology in Berkeley, California. Gleaves was born and raised in Houston, Texas, and now makes his home in Grand Rapids, Michigan, with his wife, Mary Eilleen. [Taken from http://hauensteincenter.org/staff/]

Gleaves Whitney: Traditions of Conservatism
2015 | The Roots of American Conservatism — and Its Future