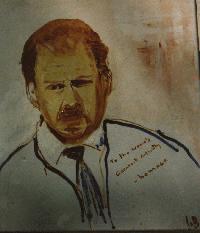 I wish I could be with you for this celebration. As my dear mother once wrote,
on approaching senility, to a friend whose invitation she had to turn down,
"Only my absence prevents me from being there."

But I happily record my greetings and my admiration for the guest of honor.
Many years ago at dinner with Max Eastman he asked me if I had read Liberty
or Equality? by Erik von Kuehnelt-Leddihn. As a matter of fact I had just then
read it. "Amazing!" Eastman, the learned essayist, critic, and philosopher
remarked. "Reading it is like going to college and graduate school, all over
again."

I agreed. Moreover, my affinity for the mind of Kuehnelt-Leddihn would prove
extensive. He is the only writer whose column appeared in National Review
when the magazine was founded and continued to appear in it for 35 years. The
mind of Kuehnelt-Leddihn is more fully stacked than that of anyone I have ever
known, but not merely in the $64,000 Question sense, in which wandering
scholars can be found who can answer questions about the dates of the Second
Pelopponesian War. If such a question were directed to Kuehnelt-Leddihn, he
would tell you why the years of that war were important, and the impact they
had on the thinking of Aquinas after he had discovered Aristotle. There was
never (that I know of) a mind better fixed on the reticulations that, if diligently
pursued, will take you from Mother Teresa to Sister Boom Boom.

It unquestionably occurs to some that in reading Erik you are in the hands of an
exhibitionist. It is important to know that this isn’t the case: an exhibitionist
seeks merely to display the knowledge he has achieved. Kuehnelt-Leddihn seeks
with agonizing effort to put that knowledge to the service of a set of ideas he
has hammered out from his conversance with the history of the world, and the
history of human thought. He now and again takes obvious delight in the
historical or linguistic bon mot, but only because he is convinced that you and I
will share in that delight: he is never just showing off. Two or three novels back
I wrote about Berlin during the time that the Wall sent up, and my story began in
the awful days when Hitler was preparing to go to war. Kuehnelt-Leddihn liked
the novel immensely, and sent along a pleasant single-spaced four-page letter
wherein he engagingly pointed out seventy or eighty errors, traceable to
historical solecisms, proper names improperly attributed to characters from that
particular region of Germany, misleading street addresses…I was both appalled
(at the size of the accumulation), and amused (by the arcana brought together). I
wrote to ask his permission to publish his letter in my little corner of National
Review (it is called "Notes & Asides") where I publish correspondence that
especially appeals, for one reason or another. He wrote back instantly and said
under no circumstances was I to do any such thing, the letter had been only for
my own amusement. A year later I had mislaid the critical letter and wished to
show it to someone as a rogue example of Kuehnelt-Leddihn’s voluminous
knowledge: would he be so good as to send me a copy of it? He hadn’t kept a
copy.

This is not a night for a lecture from Erik von Kuehnelt-Leddihn, let alone from
me. I say only this, as one of his oldest friends and admirers: We are proud to
have known him. His books present difficulties. They cause some readers to
jump up and down with frustration/indignation/fury. But not enough I warrant,
to have caused an (respectable) reader to take any one of his books and toss it
into the fireplace. Because, I suspect, any intellectually sentient man would feel
that to do so would be the equivalent of tossing into the sea a huge collection of
valuable stones, irregularly set, perhaps; eccentrically cut, yes: but giving out
shafts of brilliant light.

From a distance, I raise my glass in a toast to a great teacher and a great man.