Stroup – An Environment of Freedom

An Environment of Freedom 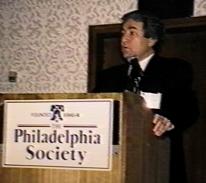 I want to begin this final session by saying that a bold, pro-growth economic agenda is strongly
compatible with a sound, pro-environment agenda: An agenda that can be sold to the general
public. I begin with same basic facts of life in environmental policy.

1. The demand for a positive environmental policy is real. And it’s driven by strongly
rising incomes: willingness and ability to pay for better environmental quality rises
rapidly as incomes go up. High income people are the ones pushing hardest for stronger
environmental policy. Consider the Sierra Club. It only costs $25 per year to join, but Sierra Club
data indicate that those who join actually have incomes far above average for their age groups.

Economist Don Coursey, at the U. of Chicago, has more general numbers: They show a very
strong responsiveness of willingness to pay for environmental quality–to demand stronger
legislation, to contribute to environmental groups, and so on–as incomes rise. How responsive is
that willingness to pay? Just as responsive as the demand for luxury cars. Look– when an oil price
rise causes income in Dallas to rise 10%, the sales of Cadillacs, BMWs and Mercedes rise 25%!
Two and a half times as fast as income rises! But when oil prices lag, and incomes in Dallas fall
10%, sales of those luxury cars fall by 25% too. And when Coursey tracked pages of new
environmental legislation across states, with rising incomes in some states and falling income in
others, he found a similar pattern: higher incomes–more new pages of environmental legislation. He
looked at several other measures across time, across nations, and found the same kind of
pattern…higher incomes lead to more demand–more willingness and ability to pay–for a better
environment.

In the late 1980s and early 90s, when economists began to recognize the strong influence of rising
incomes, on rising environmental demands, I started to be hopeful: If environmental groups could
be made to recognize that rising income is a fundamental driver of the rising willingness to make
sacrifices for the environment, and if pro-growth Republicans did too, then a natural alliance
could develop. The counterproductive, income-destroying components of environmental policies
made in the 1970s and early 80s–the worst parts of the Clean Air Act, the Clean Water Act,
Superfund, and wetlands regulation for example–might be reversed while strong, cost-effective
policies to control pollution might be enacted. Environmental policies that are more positive and
productive for people wanting better, might emerge. But only a little of that positive change has
happened. We need to change that! To bring that positive change, we need to also recognize a
couple of more facts of policy life.

2. Regulators, like all government agencies, and like the rest of us to some degree, have
tunnel vision. The top decision makers in particular want to accomplish as much as they
can for their own narrow mission in life–protecting people from a specific set of risks, or
providing as much game habitat for the public, or whatever their narrow mission might
be. We should not condemn them for wanting to do more regardless of cost, when they can make
others pay. Don’t condemn them, control them! Since the public will generally pay the bill, the
public needs to understand the agency’s tunnel vision, and to control it. (Tunnel vision, by the way,
is the insight of Justice Stephen Breyer, appointed by President Clinton to the U.S. Supreme Court.
He has an excellent short book on why regulation isn’t working (Closing the Vicious Circle), that I
recommend to you.) Just as the police need to be restrained in their fight against crime, by the
burden of proof and rules of evidence, the EPA needs similar restraint. That restraint isn’t there.
(Another excellent book, which I recommend highly, explains why: Power Without
Responsibility; it’s author is David Schoenbrod, a former founder and chief legal officer of the
NRDC, who now teaches law.)

Tunnel vision runs wild in the EPA and other environmental regulatory agencies because especially
in the 1970s the Congress reacted to exaggerated reports of environmental damages. They gave
enormous discretionary powers to tunnel-visioned bureaucrats. Some of the damages were real
and had to be stopped. Others were concocted–strictly hypothetical. But too many are being
hyped as if environmental problems were waging an all-out war against us. The rights of citizens are
being trampled and resources are being wasted on a grand scale.

The Reagan Republicans saw this waste and excess, and tried to stop it. But they failed to advertise
strongly, up front, that they understood that real and important damages are wrong, just as crime
is wrong, and must be stopped–just as the abuse of innocent people by the regulators must be
stopped. They didn’t do that, and they were painted as "anti-environment" by national
environmental groups. Conservatives have had that label ever since. We need to change that! And I
believe that we can. A key step in doing that is to recognize a third fact of environmental policy life.

The first kind of environmental issue is this: how do we produce and provide services and
amenities–preserve wilderness and open space, provide habitat, save some old-growth forest
areas and so on. The private sector does this best, but if government is going to get into the act, the
action should be on-budget. When government produces anything, from military protection for the
country to parks for our enjoyment, it best produces them with a budget. The budget empowers
the agency to act, but it also restrains the agency from too much of their kind of production. This
way, the property rights of people with productive resources are respected. Why? A couple of
reasons: The first is justice–the public takes what it wants, but only if it pays for it; that’s in the
Constitution for good reason. The second reason is effectiveness–to produce anything, markets,
prices and positive incentives work better than socialism and command-and-control by central
planners. And the budget process establishes priorities. Otherwise, command-and-control policies
can run roughshod over people, as the bureaucratic leaders do not have to test their priorities and
their decisions against competing priorities in the political arena, where voters have influence.

The second, and very different kind of environmental issue is pollution: physical harm done to some
people, or to their property, by other people. Here, the police powers of government–command
and control by government agents backed up by guns– are appropriate. We want to stop those
who do wrong: We don’t want to pay people not to commit crimes. For the same reasons, we
don’t want to pay people not to harm others by polluting them. When the harm is real and
serious, then we call in "the sheriff" to stop it. The property rights of victims, or potential
victims, are respected and protected by the police powers, against polluters. The police, of course,
are restrained by the burden of proof. Those accused of wrongdoing have rights too, until they are
shown to be guilty. Only wrongdoers should be held back by the heavy hand of the law; the
innocent should not be hassled when it can be avoided. Not in stopping crime, not in stopping
harmful pollution.

I’ll say it again: these two very different kinds of environmental issues demand two entirely
different kinds of policy response. Using one policy type, when the other is called for, is nearly
always a disaster. It is usually immoral too. It is just wrong to use the police powers to force
production of public goods, without proper market compensation.

A positive, workable environmental policy agenda recognizes the difference here. It never confuses
the moral issue of real physical harm, done to other individuals by polluters (harm that is properly
prevented by the exercise of government’s police power) with, on the other hand, the desire for
more and better amenities and useful public services (like scenery and animal habitat–things better
provided privately, or by a government agency operating with a budget to purchase production).
This vital difference between environmental issues that are best approached through budgets and
the market, and environmental issues involving the morality of right and wrong, that are best solved
by using police powers, is seldom recognized today. In fact national environmental groups
sometimes intentionally confuse the two, in order to bring moral authority to their desire to control
land use. This has to be changed!

HOW DO WE GET THERE FROM HERE?

Justice is on the side of those of us who want these changes. Environmental benefits of the changes
will be large. Stopping actual wrongdoers cold, and freeing the accused who are innocent, is as
high a calling as we can aspire to. Protecting the property rights of both kinds of potential
victims–victims of polluters and victims of wrongfully applied regulation–is the right thing to do.
That is why markets, in a context of equal access to just legal procedures, work across the world
to make the lives of citizens better. This concept of property rights, protected and tradeable in
markets, applies just as strongly to environmental issues as it does to other resource and
productivity issues.

Let us move now to three different and highly effective presentations that help us to see what is
good policy and what is bad policy, and how to think about crafting better policies.

Dr. JoAnn Kwong tells of what happens when government "calls in the sheriff" to protect wildlife
habitat on private land–protect the habitat from the owner’s use–when it should instead leave such
protection to voluntary action or, if it is to use government’s powers, it should do so on budget.

R.J Smith provides real-life success stories that show us how the private sector has for more than a
century been protecting both species and habitat, in innovative and cooperative ways; and how the
Endangered Species Act destroys habitat, and reduces the ability of those who care, to replicate
those successes.

Lynn Scarlett tells us how and why to use local government and local cooperation to produce
positive, cost-effective results in place of the kind of central planning, command-and-control
policies that have reduced–not increased–production in economies all over the world whenever
they have been used.