Robinson – The Security Dimensions of Global Finance: The China Case

“The
Security Dimensions of Global Finance: The China Case” 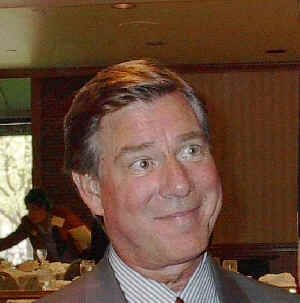 It’s
a real privilege to have the opportunity to appear before such a distinguished
gathering and I’d like to express my gratitude to Margo Carlisle, Ken Cribb,
Diana Denman and all of those at the Philadelphia Society who helped make this
occasion possible for my daughter, Grace, and myself.
I’d also like to give thanks for one of the true pillars of the
Reagan Revolution and a national treasure, Stan Evans.
I can’t hope to be as entertaining as Stan so, by default, I’ll
dive into the matter at hand.

I
recently finished reading a genuinely moving tribute entitled “Flags of our
Fathers” by the son of a Navy corpsman who survived Iwo Jima, John Bradley.
I’m sure many here have read it.
As the author took you through seemingly countless anecdotes of
agonizing hardships in combat — and the tears they inspired — you couldn’t
help but marvel at the fundamental decency, selflessness and valor of
Americans during World War II.

Sacrifice
for Americans who remained at home was also a common virtue, as captured by
the wartime dictum: “use it up, wear it out, make it do, or do without.”
So too, were the purchase of victory bonds by average Americans who
repeatedly answered the call to invest directly in America’s brave fight for
freedom. Indeed, on March 7, 1945
— while the brutal struggle for Iwo Jima still raged on — then
Representative Mike Mansfield took the House floor to initiate America’s
seventh National Bond Tour. Mansfield
proposed that the famous photograph of the flag raising on Mt. Suribachi be
the symbol of this tour so that, in his words, “we as a people would do our
part in keeping the flag flying at home as they have done in keeping it flying
on foreign battle fields.”

Today,
it’s my sad duty to report that many Americans are, often unwittingly,
buying very different types of government bonds — those of the People’s
Republic of China and the Russian government.
To date, the total amount of Beijing’s and Moscow’s sovereign bond
offerings in our markets has totaled roughly $17.8 billion.
What is worse, few if any questions have been asked by these investors
about where that money — perhaps your money — was going, or how it
was to be used. Such funds may
have been used to reschedule debt or finance benign commercial activities like
hydro-electric plants.
But they may just as easily have been employed to help
develop and build China’s DF-31 or Russia’s Topol M mobile ICBMs targeted
at American families.

It
is, in short, high time that we begin to focus on global “bad actors”
increasingly funding themselves and their odious international activities in
not only the U.S. bond market but in our stock exchanges as well.
As we American investors do so, we need to ask, among many other
questions: Is our money going to finance a baby food-manufacturer — or to
fund supplier credits for proliferation-related weapons sales to Iran or Iraq?

China: A Case in
Point

A
prime example of the need for such a national “follow-the-money” effort
involves the Communist government with the most voracious appetite for
American capital: the People’s Republic of China.
As you heard last evening, there is abundant evidence that China has
emerged as the greatest threat to the national security of the United States
as we enter the 21st Century.
Like the recent stand-off with Beijing over our surveillance aircraft,
we Americans didn’t cause this to happen.
It was destined to eventuate when the Chinese leadership, years ago,
identified us as their principal adversary — or, in their words, their
“main enemy.” No false
“strategic partnership” or largely one-sided engagement policy can paper
over this unhappy reality. Moreover,
Beijing has cast itself in the role of the “Great Enabler” with regard to
rogue state acquisition of weapons of mass destruction and ballistic missile
delivery systems that put at risk U.S. forward-deployed forces and,
ultimately, America itself.

The
good news is that we are not without policy options concerning what we can do
about the burgeoning Chinese threat before a crisis is upon us.
Strengthening our vigilance and scrutinizing the inherent and emerging
weaknesses of this large Communist competitor should be first orders of
business. In the energy sector
alone, China’s demand for oil imports will likely double by 2010.

Due
to Beijing’s reluctance to render future Chinese economic growth vulnerable
to the world’s spot markets for oil, Beijing has crafted what was — until
recently — a strategically clever foreign oil acquisition strategy:
Go to pariah oil-producing states where G-7 companies are discouraged
(or prohibited) from doing business; offer large amounts of cash investment,
conventional weapons and/or components for weapons of mass destruction and
ballistic missiles; and, in exchange, secure contracts and oil concessions
which provide China with dedicated physical supplies.
It is, at least in part, pursuant to this strategy that you find
Chinese state-owned energy firms like China National Petroleum Company and
Sinopec in places like Sudan, Iran and Iraq.

Something
new has begun to interfere with this dangerous Chinese strategy, however:
A growing coalition of non-governmental organizations (with combined
memberships totaling as many as 20 million Americans) has succeeded in
connecting-the-dots between the operations of PRC energy companies in Sudan
and the use these state-owned entities are making of their access to the U.S.
debt and equity markets to help finance Beijing’s partnership with the
brutal regime in Khartoum.

The
message is straightforward: we urgently need the Securities and Exchange
Commission to adopt strengthened transparency and disclosure requirements in
our markets so that American and other investors know the true identities and
global activities of the foreign firms, governments and senior managements in
whom they are being asked to invest. If
we, as a nation, were to pay greater attention to the destination of our
funds, we would likely inflict serious costs on global “bad actors” —
causing many to face possibly acute financial shortfalls. On the other hand,
if we continue to turn a blind eye toward multibillion-dollar American
financing of potential adversaries and wrong-doers, we will almost surely
jeopardize not only our vital security interests, but perhaps over time our
very survival as a nation.

CNPC
and its hastily-configured subsidiary, PetroChina, launched in September 1999
an eight-month campaign to issue what was intended to be the largest initial
public offering (IPO) of stock in New York Stock Exchange history — some $10
billion.
The vigorous opposition of a broad coalition of
non-governmental organizations from across the political spectrum — which the
Casey Institute helped coordinate — together with warranted market
skepticism, slashed the actual value of that IPO to under $2.9 billion.
Nevertheless, it’s still held by some forty or more major
funds in this country, reportedly including Pennsylvania’s public pension
system.

—
I began this talk with reference to
Chinese sovereign bond offerings in the U.S.
Perhaps some in Beijing would term them “Chinese victory bonds.”
These totally undisciplined, cash borrowings by the Chinese leadership,
available for application to any purpose they — and they alone — deem
indicated, are a source of obvious concern.
The latest effort to tap into the American investor community was
scheduled for November of last year in the amount of $1-2 billion.
The so-called “PetroChina Coalition” I just mentioned, made up of
non-governmental organizations of nearly every political stripe, immediately
initiated a direct-contact campaign with those responsible for over $1 trillion
of total funds under management, urging them to avoid this undisciplined,
imprudent investment.

The
U.S. Commission on International Religious Freedom went even further and sent a
letter to President Clinton expressing deep concern over the offering on the
grounds that the Chinese government engages in religious persecution.
These coordinated efforts — almost all conducted outside of the
U.S. government — were primarily responsible for the withdrawal of this
sovereign bond offering.
Unfortunately, all other things being equal, it is only a
matter of time before Beijing will try again — probably this year.

There
are several other troubling examples of the wrong sorts of Chinese
government-affiliated enterprises in our markets, but the shortness of time does
not permit a description of them here.

I
realize that I’m speaking to a very free-market-oriented group.
Let me assure you that, in urging remedial action to address these
emerging challenges posed to our national security, human rights and other
values, I am as anxious as any of you to avoid capital controls, undue
government intervention in our markets or other measures which could impede the
free flow of capital into and out of the United States.
Our vibrant markets are the envy of the world and represent a pillar of
our global competitiveness.

Indeed,
this is precisely why the Casey Institute of the Center for Security Policy has
pursued over the past five years what we call our Capital Markets Transparency
Initiative (CMTI).
By concentrating on limited but highly significant policy
prescriptions — such as strengthening SEC disclosure and transparency
requirements and encouraging the voluntary expansion of “due diligence” risk
assessments by U.S. fund managers to include national security, human rights and
other new forms of “political risk” — we have sought to remain consistent
with market forces and practices. Only
in the most egregious circumstances, have we felt compelled to oppose a specific
foreign firm’s or government’s stock or bond offering.

I
needn’t tell this audience that more transparency and discipline is a good
thing for investors, particularly with respect to emerging market enterprises.
Moreover, expanded political risk assessments represent a normal
evolution of the marketplace, since these challenges have not been on our radar
screen heretofore. Taking a stand
on a specific foreign equity or debt offering, however, when there is an
inordinate risk that U.S. investor money could go, for example, to help finance
genocide, terrorism, proliferation and slavery in Sudan is a moral and civic
duty, as well as a prudent financial decision.
After all, even from a purely financial perspective, divestment and IPO
opposition campaigns — not to mention potential U.S. government sanctions —
can depress the value of targeted foreign securities.

Fortunately,
the Executive Branch and the Congress are now actively exploring this new potent
policy tool.
Unlike trade sanctions, which typically require an
unachievable level of multilateral cooperation and can inflict significant
“collateral damage” on U.S. exports and jobs, rarely applied capital markets
sanctions avoid the bulk of these shortcomings.
By contrast, thanks largely to the robust opposition of non-governmental
groups, the U.S. Commission on International Religious Freedom and key members
of Congress, China was forced to forego as much as 50% — or some $12-13 billion
— that it had planned to raise on the U.S. capital markets last year.
To put this figure in perspective, China reportedly raised a total of
only $18.6 billion in the global capital markets last year.

In
closing, Thomas Paine once said: “Those who expect the blessings of liberty
must undergo the fatigues of supporting it.”
My colleagues and I don’t think it’s too fatiguing for American
investors and fund managers to insist on knowing where their money is going and
how it’s being used. Likewise, we
don’t think it’s an imposition to urge the SEC to broaden disclosure
requirements to account for these valid, new market risks for investors.
And finally, a growing number of us are convinced by the facts that, if
we as a nation of investors, entrepreneurs and decent, patriotic working folk
fail to undertake these highly-achievable tasks, we will end up unwittingly
underwriting the debasement and endangerment of our liberties.

*
The views expressed in this presentation are my own and do not necessarily
reflect the views of the U.S.-China Security Review Commission.