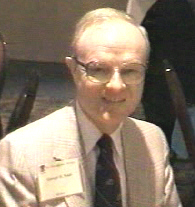 In an autobiographical statement written around the time of
World War I, Herbert Hoover declared:

“There is little importance in men’s lives except the accomplishment
they leave to posterity. What a man accomplishes in life is of many categories
and of many points of view; example, moral influence, leadership in thought and
inspiration are difficult to measure, to prove or to treasure …. In the
origination or administration of tangible institutions men’s parts can be more
certainly defined. When all is said
and done…accomplishment is all that counts.”

Tonight we celebrate the accomplishment of one of the
pioneers of American conservatism. Since his entry into conservative activism
more than fifty years ago, Victor Milione has seldom stood in the spotlight.
Perhaps for this reason, his example and influence have been easy to
overlook. But there is one realm in which his achievement can be, in Hoover’s
words, "more certainly defined."
Quietly, doggedly, unobtrusively, for most of his adult life Milione has
devoted himself to building a "tangible institution."

As conservatives we sometimes tend to regard institutions
as vast and faceless entities. In reality, they are human artifacts which, at
least in their infancy, reflect the vision of their creators.
So it is with the Intercollegiate Studies Institute and the man we honor
tonight.

To appreciate Victor Milione’s imprint upon ISI, we must
turn for a moment to another man, the institute’s founder: Frank Chodorov. Born
in New York City in 1887, Chodorov was an uncompromising libertarian. No one, he
claimed, was further to the Right than he. A temperamental aginner, he once
remarked: "As for me, I will punch anyone who calls me a conservative in
the nose. I am a radical."

In 1950 Chodorov published an article in Human Events lamenting
the ascendancy of socialistic thinking in the United States. To him the key to
collectivist success had been the zealous, proselytizing efforts of Socialist
clubs on college campuses in the generation before 1933. Taking a cue from his
ideological adversaries, Chodorov urged the creation of a countervailing network
of Indivdualist Clubs supported by a "lecture bureau" and
"missionary lecturers." In a separate article he proposed what he
called a "fifty-year project" to implement such a counterrevolution on
the campus. Fifty years! It would take that long, he believed, to reverse
"the socialization of the American character."

Chodorov did not expect anything concrete to emerge from
his published musings. Imagine his astonishment, then, when he received an
unsolicited check in the mail for $1,000 from none other than J. Howard Pew.
Thoroughly taken aback, and having no definite plan for using the check,
Chodorov told Frank Hanighen of Human Events that he thought he would
simply return it. Hanighen’s advice was sage and swift: "Never send money
back."

But how, then, should Chodorov spend his windfall? A friend
at the Foundation for Economic Education suggested that if Chodorov would
compile a list of names of college students interested in libertarian writings,
the foundation would disseminate its own publications to these individuals.
Chodorov agreed. Not long afterward, he formally established the Intercollegiate
Society of Individualists in the offices of Human Events and asked its
readers to submit the names of receptive students.

At first ISI was little more than a "mailing-list
operation" (as Stan Evans has put it) for distributing libertarian
literature to a scattered student Remnant. Then, about a year after its
founding, a friend of ISI in the Midwest raised the princely sum of $6,000 for
its activities. As Chodorov later told the story:

“That made me rich. So, I hired Vic Milione to run the
outfit and to visit schools in the East …. I told him, ‘Vic, I have this money
and as long as it lasts, you will get $75 a week and expense money. You’ll have
to take your chances on the future.'”

Milione, then about thirty years old, had been working for
an organization called Americans for the Competitive Enterprise System. It tells
us much about him that he decided to take the chance.

So in 1953 Milione entered the service of ISI. His roles
were many: part fund-raiser, part office manager, part traveling salesman for a
cause. It was well for ISI that he joined its management when he did. Chodorov,
the visionary individualist, had some quirky business habits. When checks
arrived in the mail he would deposit them, but he did not keep copies of his
letters acknowledging the gifts. As Ken Cribb will tell you, this was no way to
build up a donor base.

This, then, was Vic Milione’s first notable contribution to
ISI: he brought order into its struggling operations. For a time, after the
$6,000 bonanza ran out, he even worked without salary and expense money until he
could secure additional funds. If ISI was Chodorov’s baby, it was Milione, as
much as anyone, who raised the child to maturity.

It would be wrong, however, to convey the impression that
Milione’s niche at ISI was confined to that of a chief operating officer. It
turns out that he had a vision of his own. For one thing, he was not an
individualist–not in the sense that the arch-libertarian Chodorov used the
term. On at least one occasion Milione told Chodorov frankly that combating
socialism was not enough.

Here we come to the second crucial contribution that Vic
Milione made to ISI. Frank Chodorov was not a conventionally religious man. For
many years he was a vehement atheist. Later in his life, as he sought a firm
metaphysical foundation for his philosophy of individual rights, he slowly and
reluctantly accepted what he called the "God-idea"–faith that in
nature one could discern "immutable law." But at most, his was a
vaguely deistic religion without a deity.

Milione, on the other hand, was and is a Roman Catholic,
convinced (as he once put it) that the "basic premises of
conservatism" include the conviction that "this is a God-centered
universe" and that "man is a part of that creation." To Milione
the fundamental purpose of ISI was to preserve Western civilization, a
civilization rooted in the Judeo-Christian tradition. A civilization, in other
words, that is religious at its core.

I do not wish to imply that differences over religion ever
arose between ISI’s founder and his first lieutenant. What I do suggest is that
over the years Milione and his successors broadened ISI’s mission to encompass
more than a Chodorovian crusade against collectivism. One sign of this
reorientation occurred in 1966 (the year of Chodorov’s death) when, after years
of queasiness about its name, the organization restyled itself the
Intercollegiate Studies Institute.

Without the presence of Vic Milione, ISI might easily have
evolved in a narrowly libertarian direction. Instead, it became a vehicle for
the traditionalist wing of conservatism as well.
In so doing, it averted the shoals of
sectarianism and helped to enlarge the conservative mainstream.

I will not tarry tonight over the statistical indicators of
ISI’s growth under Milione’s stewardship. But as we sum up his accomplishments,
two final comments come to mind. First, I am struck anew by how humble ISI’s
origins were and by how resolutely Milione persevered in those formative years,
when worldly wisdom might easily have prompted him to move elsewhere.

But "perseverance" does not quite say it all. Few
people, think, will persevere for long in adversity unless some transcendent
purpose impels them. So it was with Frank Chodorov in 1950. At the end of his
seminal proposal for a "fifty-year project" to reclaim the American
mind, Chodorov asked: “Is the effort worth while? To which one offers as
answer another question: What is life is more worth while than the pursuit of an
ideal?”

Well, we know how Vic Milione answered that question.
For his idealism, his fortitude, and his priceless institutional legacy,
we salute him.