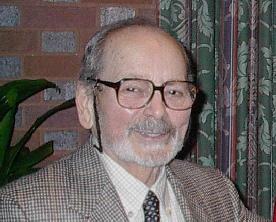 I heard recently that Russell Kirk turned down a tribute
such as this. I now know why—it
sounds too much like a eulogy. The
only difference is that you’re sitting up.
Oh well, at least I’m grateful to be sitting up.
Brookes Adams believed that “one friendship in a lifetime is much; two
are many; three are hardly possible.
Friendship needs a certain parallelism of life, a community of thought, a
rivalry of aim.”
Claes Ryn, Stan Evans, Lee Edwards, George Nash, and Ken
Cribb meet those criteria of friendship. We
have known one another for many years and have, each in his way, sought to
restore a heritage of knowledge, values and behavior which secures individual
freedom and encourages excellence. I
am pleased to be in their company tonight, and I am grateful for their generous
remarks.

I have known Stan Evans since his days at Yale.
I also shared an apartment in Tarrytown, New York with Stan and Don
Lipsett during a two-year period in the middle 1950s when ISI was situated at
the Foundation for Economic Education. Frank
Chodorov, the founder of ISI, had become the editor of the Freeman, and
ISI had followed him there. Our
friendships continued there, and one or two years after ISI left FEE, Don
Lipsett became Midwest Director and later came to Philadelphia to become
National Director.
The Philadelphia Society was germinated here, but went its
separate way. Don contributed much
to ISI’s growth and success in its early years.

I would like to introduce a few other individuals in the
audience who were critical to the long-term success of ISI.

Charles Hoeflich, Chairman Emeritus of Univest Corporation,
and until recently, Secretary-Treasurer of ISI.
Charles has been with ISI almost as long as I have.
He is an old friend whom I have often relied on for advice,
encouragement, and, now and then, a loan. Charles
had a birthday recently and I sent him a card which asked which birthday this
was: “who cares” or “I don’t give a damn?”
I don’t know which Charles picked, but I’m going with “I don’t
give a damn” on my next birthday.

John Lulves, Executive Vice President of ISI.
John was young, had dark hair, booming voice, and a great mind when he
joined the staff.
He is a little older, still has hair, that booming voice, and
that great mind. I think he had
already real all the great books before he joined ISI, and he has spent the
years since then reading everything else. He
was my alter ego. [That means I took the credit and assigned him the blame.]

Brig Kraus. Brig
took care of me and she was office manager, to boot.
Brig now takes care of Ken, which leaves her little time for
anything else.

My wife, Mali, and my son Lou for their love and
encouragement over the years, but especially during difficult times when I was
distraught.

Then there were a gold mine of field representatives—too
many to list here—but who nevertheless were crucial to ISI’s success.

Also key to ISI’s success, were the various editors of
the The Intercollegiate Review, Under Thirty, The Academic Reviewer, and Continuity.
Some publications were discontinued for funding reasons rather than for
lack of merit. However, ISI later
added the Political Science Reviewer, and Modern Age to the roster
of publications. The PSR is
the brainchild of Dr. George Carey, a respected and renowned political
philosopher who teaches at Georgetown University.
He remains the editor of the PSR. Russell Kirk, author of The
Conservative Mind, was the founding editor of Modern Age.
The current long time editor of Modern Age is Dr. George A.
Panichas.
Dr. Panichas is professor of English at the University of
Maryland, and the author of The Critic as Conservator.
Henry Regnery, long time Chairman of ISI was the principal benefactor of Modern
Age at its founding and for many years thereafter.
In addition, Henry was Chairman of ISI’s Trustees for many years, and
an exceedingly generous patron. Perhaps
it should be noted here that all of these journals were scholarly and, as such,
set the tone for all of ISI’s endeavors.

There were two critical aspects of ISI”s success, I
believe. First is that ISI’s
members are self-selected. In
ISI’s first few years, parents, grandparents, and other individuals sent in
the names of students they wanted to convert.
This approach failed miserably. Many
let us know that they felt they were being used and wanted their names removed
from our list. Consequently, ISI
has a long-term policy of adding names only of individuals who request that we
do so. In tandem with that policy,
ISI, also does share or sell its lists. Members
are not pawns.

Second the ISI effort through its publications, lectures,
summer schools, etc.—were to always reflect quality, broadness (spanning many
disciplines) and sound scholarship. To
accomplish this we needed our own publications and programs designed
specifically for students and teachers. We
wanted ISI to teach rather to promote activism.
For instance, Alexis De Tocqueville held “that there are two aspects of
politics which should not be confused, one fixed and the other in flux”:

“The first is based on the very nature of man.
It depends on his interests, faculties, and needs as revealed by
philosophy and history, his instincts changing their purpose at different times,
but without changing their nature, being as immortal as the human race.

Then there is also a practical and militant aspect of
politics coping with everyday problems, and adapting itself to a multitude of
varying circumstances. It provides
for passing needs and is aided by the ephemeral passions of its contemporaries.
This is the art of government.”

It seems to me that what De Tocqueville writes about
politics can also be said of other disciplines, such as history and philosophy,
as well as economics.

ISI’s mission has always been to concentrate on the fixed
aspect, the grounding principles of the disciplines.
This did not mean that we never dealt with current events.
It simply means that current events shold not drive the treatment given a
discipline. When you lose sight of
the grounding principles teaching becomes simply issue advocacy.
That is what have on many campuses today.
Instead of study in the disciplines, we now have Faculty pursuing
agendas—with each subject a foil and students the pawns.
In this emphasis on first principles, ISI was in agreement with Richard
Weaver’s judgment that educational institutions “should be places of
reflection and contemplation, the acquisition of knowledge, and the refinement
of feelings, rather than political arenas where scholarship and course content
are made subservient to political ends.”

The word truth can be found in the motto of many schools
across the land, but it stands as much in mock as mark.
The search for truth over the centuries produced Western Civilization as
well as our specific American Heritage. That
Civilization and that Heritage has been severely damaged by relativism.
Relativism destroys continuity. Nothing
is constant; all is in flux. When
relativism insinuates itself in a culture, the culture begins to unravel.
A nation then becomes a dumping ground of unrelated cultural phenomena.

As Richard Weaver noted, the Founding Fathers, “were
prepared for great political achievement by an education which was not political
in the overt sense. They had been
educated in the long tradition of Western culture.
It is my contention that this kind of education is nonpolitical because
the tradition has presumption in its favor.”
In short, as the old English proverb has, “Time Trieth Truth.”

The soundness of ISI’s approach is well demonstrated by
the Weaver Fellowships. There have
been 500 recipients to date. They have published over 1,000 books—8,000
articles and reviews—and it is estimated that they teach about 50,000 students
each year. I have monitored the
applicants since the beginning, and I have been on the Awards Committee since
retirement. We could have awarded
three times the number without diminishing the quality of its recipients.

Ken Cribb’s accomplishments in the last ten years at the
helm bode well for ISI. ISI is now
situated on a fine 27-acre campus, finances have improved about tenfold,
membership is growing, and all programs—including a growing book publishing
endeavor—are thriving. Fifty
years of integrity [meaning both honesty and wholeness] of effort, and
diligence, has reaped rich rewards.