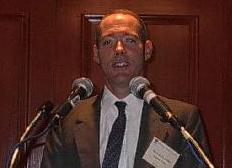 In the nineteenth and twentieth centuries, a host of progressive planners
and reformers repeatedly urged the American South to join the rest of America in
the March of Progress and National Consolidation.
I won’t talk about the biggest “urge,” back in 1861.
I’d like to focus on the urges after the War for Southern Independence.
After this war, the urges continued, often coming from Southerners
themselves. Let me briefly cite a
few instances.

Early in the 1880s New South
advocate Walter Hines Page told Southerners that if they wished to bring
progressive education, science, industry, and economic prosperity to the South,
they must bury, permanently bury, “the Ghost of the Confederate dead, the
Ghost of religious orthodoxy, and the Ghost of Negro domination.” According
to Page, the dead hand of the past was holding the South back, keeping the
blessings of progress from the region. In
his commencement address at the State Normal School in Athens, Georgia, in 1901,
Page asked his audience to recite in unison what amounted to a new religious
creed:
“The more men we train, the more wealth everyone may create.
I believe in the perpetual regeneration of society, in the immortality of
democracy, and in growth everlasting.”
In his famous 1886 “New South” speech, Henry Grady repudiated
the Southern past as well, declaring that education, science, and industrialism
would be the salvation of the New South. As
Lewis P. Simpson has observed, New South advocates like Grady believed in a new
“sacred trinity”: Education, Science, and Industrialism (The Dispossessed
Garden 82).
Salvation will come from this secular god, not from a
gracious, loving, and righteous Father, Son, and Holy Ghost.

Many Southerners in the 1930s
heeded the siren’s call for pleasure, profit, novelty, and efficiency.
Donald Davidson complained that the materialistic spirit of the New South
persuaded some Southerners to use as their “mirror of well-being the front
page of the newspaper, or the society page, or the stock market quotations”
(Southern Writers 2). What
Mark Twain said of two drummer scoundrels in Life on the Mississippi
illustrates the New South mammon worship: “the dollar their god, how to get it
their religion.”

Though many Southerners ignored their past and embraced the New South
Gospel of Profit and Progress, some took a stand against progressivism.
The Southern Agrarians are perhaps the most famous 20th
century opponents of American progressivism and defenders of traditional
Southern customs, ideas, and values. Allen
Tate helped the fledgling Agrarians to put calls for progressivism in
perspective in one of his 1927 letters to Donald Davidson, three years before
the Agrarians published I’ll Take My Stand.
This is Tate to Davidson: “I
think the test of the True Southern Spirit would be something like this:
whenever the demagogues cry ëNous allons! [Let’s go forward] if the reply is
ëNon, Nous retardons! [No! We’ll stay behind] then
you may be sure that the reply indicates the right values” (TLC 191).
When the demagogues urge us to go forward, to join the March of Progress,
Tate insists that the True Southerner will stay where he is, or even look
backward.

The Agrarians were not the only
twentieth-century Southerners to resist “Progress” and National
Consolidation. They influenced
others: Richard Weaver, M. E. Bradford, and Flannery O’Connor, to name only
three of many.
Flannery O’Connor speaks for True Southern folk in comments
she made in 1957 about changes in her region.
Speaking for herself and other Southern writers, she said:
“The anguish that most of us have observed for some time now has been caused
not by the fact that the South is alienated from the rest of the country, but by
the fact that it is not alienated enough, that every day we are getting more and
more like the rest of the country, that we are being forced out not only of our
many sins, but of our few virtues” (MaM 29).
She also said it was difficult “to reconcile the South’s instinct to
preserve her identity with her equal instinct to fall eager victim to every
poisonous breath from Hollywood or Madison Avenue” (MaM 200).

The New South’s continuing attack on old Southern ways has at least two
common themes: admonitions to forget the past and to put money in thy purse.
Some change the tune a bit, saying, remember the injustice of slavery and
put money in our purse by supporting affirmative action and reparations.
While many Southerners oppose Leviathan’s liberal social
engineering, they are nevertheless the new provincials Allan Tate identified
over fifty years ago: They have lost their “origins in the past and its
continuity into the present, and begin every day as if there had been no
yesterday.”
Increasingly
all of life seems to be measured by economic and materialistic yardsticks, for
the South no less than for other regions of the United States.
To quote Allan Tate once again, “All are born Yankees of
the race of men/ And this, too, now the country of the damned” (87).
In contrast to the True Southern spirit, a Yankee of the race of men will
sacrifice his loyalty to family, to kin, to place, to community, to heritage–he
will sacrifice his birthright and his piety toward God and the creationóall
for a mess of progress.

But is the True Southern spirit dead? Is
the True Southern Spirit of resistance to Progress and National Consolidation
(and now global consolidation)óis it a Lost Cause, just as lost as the War for
Southern Independence one hundred and forty years ago?
What does the South have to teach us?
It teaches us the wisdom and hope that T. S. Eliot expresses so well in
his Choruses for The Rock and in his essays: there are no Lost Causes because
there are no Gained Causes. Let me
quote Eliot on this point: “If we take the widest and wisest view of a Cause,
there is no such thing as a Lost Cause because there is no such thing as a
Gained Cause. We fight for lost
causes because we know that our defeat and dismay may be the preface to our
successors’ victory, though that victory itself will be temporary; we fight
rather to keep something alive than in the expectation that anything will
triumph” (Selected Prose of T. S. Eliot 199-200).

Leviathan is a mighty enemy. Cultural
amnesia and mammon worship are mighty enemies as well.
The world, the flesh, and the devil are not new temptations, though they
may dress up in a different fashion today than in years past. The
conflict between the Old South and the New South is still with us.
The Southern Tradition is still at bay.
We may hope that some of our past is decently buried: the ghost of Negro
domination, for instance. But we
should not forget the past, beginning every day as if there had been no
yesterday. We should
not bury religious orthodoxy, and the morality that goes with it.
With Stark Young and the Agrarians, we should “defend certain qualities
not because they belong to the South, but because the South belongs to them.”
The True Southern Spirit will not embrace the religion of progress and
the philosophy of materialism. It
will find its identity in something more substantial: in a heroic and tragic
past; in spiritual convictions appropriate for this life and eternity.

With these remarks as preface, let’s turn to our
panelists. I expect they will
tell us more about both the True Southern Spirit and Yankees of the race of men.

Ted Smith received his Ph.D. in Communication from Michigan
State University. Since 1987 he has
been teaching in Virginia Commonwealth University’s School of Mass
Communications. He has commented on
journalism and public policy in numerous broadcast talks for CBS, NBC, CNN,
C-SPAN, NPR, and other news programs. He
has also published widely in trade journals and in major newspapers and
magazines such as The Wall Street Journal, The Washington Times,
and Harpers. His major
recent publications included two edited works on Richard Weaver: Steps Toward
Restoration: The Consequences of Richard Weaver’s Ideas and In Defense
of Tradition: Collected Shorter Writings of Richard M. Weaveróthese fine
books published by ISI and Liberty Press. Many
of us are eagerly awaiting his biography of Richard Weaver, to be published next
year by University of Missouri Press.

Mark R. Winchell received his Ph.D from Vanderbilt
University and has been teaching at Clemson University since 1985.
His publications include books on Joan Didion, William F. Buckley, Leslie
Fiedler, Eugene Talmadge, Cleanth Brooks, and Donald Davidson.
I especially recommend his books on Brooks and Davidson.
Cleanth Brooks and the Rise of Modern Criticism won the
Center for Robert Penn Warren Studies award for its outstanding contribution to
literary criticism. Where No
Flag Flies: Donald Davidson and the Southern Resistance will likely be the
definitive biography of the most stalwart of the Agrarians.
Anyone who has or wants to understand the True Southern
spirit will want to read this book. Dr.
Winchell writes for a host of university quarterlies and conservative magazines
of scholarship and opinion.