Cribb – Tribute to Vic Milione and His Vision

Tribute to Vic
Milione and His Vision
The
Philadelphia Society, April 13, 2002 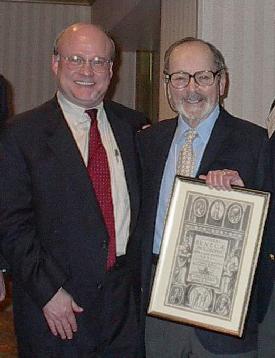 ISI will shortly celebrate its 50th Anniversary.
While others must be credited with ISI’s conceptualization, E. Victor
Milione must be credited with its very existence.
He shared with ISI’s founder, Frank Chodorov, the insight that the left
sought to effect the long-term transformation of the America character by
dominating the institutions chared with educating the young.
American students were being treated as cannon fodder in an ideological
war against the foundations of our culture, which rages in the Academy to this
day. For most of the past 50 years
Vic commanded resources inconsequential compared to the left-wing academic
establishment, but he never despaired. He
always had in mind, and would frequently quote, Tocqueville’s observation that
“every fresh generation is a new people.”
Vic knew that whatever the ravages of the moment, a life worth the living
could be restored by properly influencing the best of the rising generation.

But how to transform this insight into a living, breathing
institution, one that could reach significant numbers over long periods?
For one thing, Vic was convinced that the early conservative movement’s
concentration on economic education had to be broadened to all the humane
studies. From such breadth, world views are formed which can either affirm or
sweep away arguments of economic efficiency.

For another, Vic saw that for every means of doing damage
commanded by the Academy, ISI must have a constructive alternative for the
student discerning enough to know that something is missing.
If ISI was denied schools, it could have summer schools.
If the classroom was out of reach, there was the independent lecture and
the seminar. If ISI couldn’t
assign texts, it could make available alternative libraries of books and
journals via the mails. In short,
Vic brought to ISI an insistence on intellectual breadth and variety, so that
any essential need of the rising young scholar could be met.

In the plentitude of intellectual resources that Vic made
available through ISI, one thing that he refused to provide was a creed, a
doctrine, or any other ideological party line.
When a young man, I walked the Scottish borders with Russell Kirk, and,
seeking the easy certainties of youth, asked him for a succinct definition of
conservatism. In correctly refusing
to give me one, he offered the insight that conservatism is a disposition of
openness to realityóthat is to say openness toward the world as God has
created it, rather than a blind allegiance to one of those hypothetical worlds
in whose name so many have been slaughtered.

In the same sense, Vic has not so much propounded answers,
as he has urged that the young honestly confront the perennial questions of the
human condition:

What is man’s relation to the Divine?
What is worthy of duty?
What do the lives of great men teach us of the noble and of the base?
How does the sweep of human experience inform the tension between liberty and
order?
What does history teach us about the rise of civilizations and their decline?

Vic Milione counsels us to seek answers to these enduring questions, not through
introspection, but by immersing ourselves in the best that has been thought and
written. Through his beloved ISI,
he has helped the best of the new generations acquire the hard-won wisdom of
their fathers and translate that wisdom into the lexicon of their own time in
history. As Whittaker Chambers
wrote in the last line of his last letter to Bill Buckley, “Each age finds its
own language for an eternal meaning.”

When ISI’s bricks and mortars are a rubble, when all of
us here tonight have resolved ourselves into a dew, the legacy of Vic Milione
will live onóbecause one day in 1953, he picked up the gauntlet and became a
champion of the unseen things that do not die.
In introducing countless thousands of young people to those great
unthreatened truths, he has written upon eternity.