Campbell – The Progress of Leviathan

The Progress of Leviathan

In order to introduce the theme of
this conference I have prepared a video which rather starkly lays out the theme
of the progress of Leviathan from the Bible to Hobbes to Rousseau.

Letís orient ourselves by
starting from the present.   What
does the word leviathan  mean
to people today?   Put simply, the
word is used by many political scientists and economists to refer to a state
which has too much power, a state swollen with growth and overly centralized.
Two authors in particular (who will be familiar to many in this Society)
have discussed the problem explicitly.   The
Southern agrarian, Donald Davidson, whose name will come up in the discussion
tomorrow, published a book in 1938 entitled, The Attack on Leviathan:
Regionalism and Nationalism in the United States.
The classical liberal, Robert Higgs, published in 1987 a book
entitled, Crisis and Leviathan: Critical Episodes in the Growth of American
Government.   These two authors
share with our Society a love of ordered liberty and a hatred of the
overweening, Leviathan state.

It is a fact, however, that most
people who use the term leviathan never stop to explain it.
Even many Hobbes scholars donít spend much time worrying about the
central image of the book.
Therefore, in this video entitled, “The Progress of
Leviathan” I have tried to capture in images and music the transformation of
the symbol of Leviathan from a negative figure of evil and sin in the Scriptures
to its more positive use in Hobbesí classic, The Leviathan, and finally
to its culmination in Rousseau and the French Revolution.

Hopefully, you have had a chance
to acquaint yourself with some of these images by examining the frontispiece of
Hobbes Leviathan and the print of Gillray which are on the tables and
easels outside.

Slide 1 is an illuminated manuscript from
theVatican Bible portraying Job, the Devil, and God.
It will set the stage for much of what you will see and hear
tonight. 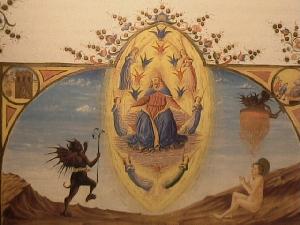 First of all the music which you will be hearing on
the video is “Satanís Dance of Triumph” by Ralph Vaughn Williams.
It is a part of his larger composition, Job: A Masque for Dancing.

The context is, of course, the
Book of Job from the Old Testament.   And
why should Satan dance in triumph?   Satan
dances because he has been allowed to inflict untold evils upon the upright and
virtuous Job.   Satanís argument to
God is that Job is only good because of his material and familial prosperity.
Indeed, it is only after everything is taken away from Job, including
much of family, possessions, and his physical health, that Job begins to
practice his proverbial “patience.” But Jobís patience is perhaps closer
to Margaret Thatcher who said on January 2, 1983: “I am extremely patient
provided I get my way in the end.”

Whatever patience Job has is not
matched by his wife who tells him to “curse God and die.”
Job does not take this advice but he does curse the day of his birth.
Here we see the first appearance of Leviathan: “Let those curse it who
curse the day, who are skilled to rouse up Leviathan.”

In Slide 2 we
see what Leviathan looks like.   This
image of the great serpent is found in the Church of St. Foy in Conques, which
is in southern France.   Appropriately
enough as we shall see, it is part of a larger Romanesque sculpture of The Last
Judgment.

The full-scale treatment of Leviathan is in chapter
41 of the book of Job.   God taunts
Job with the puniness of his power: “Can you draw out Leviathan with a
fishhook, or press down his tongue with a cord?
Can you put a rope in his nose, or pierce his jaw with a hook?”

Chapter 41 which gives the fullest
description of the Leviathan concludes with the following words: “Upon earth
there is not his like, a creature without fear.
He beholds everything that is high; he is king over all the
sons of pride.”

Slide 3 shows what happens
in the belly of the beast.   Being
king over all the sons of pride is continued in this scene where we see, a proud
knight toppling from his horse and a figure representing lust, to the right.
The Leviathan, here, is king of the proud.

For Slide 4 we move to the Cathedral of
Bourges and its Last Judgment tympanum.   The
Last Judgment portals in medieval art usually portray Christ in Majesty combined
with St. Michael weighing the souls in the scales or vanquishing Satan with a
military flourish.   The great
serpent, here, is the great Leviathan, and its jaws are the jaws of hell which
swallow the damned.   Turmoil and
confusion swirl around these scenes. 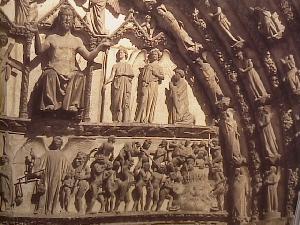 Princes, popes, and prelates often figure in these
Last Judgment scenes.   Jobís
answer to his critics in Chapter 12:21-25 prefigures this judgment of the
nations and the churches: “He [God] pours contempt on princes, and looses the
belt of the strong.   He uncovers the
deeps out of darkness, and brings deep darkness to light.
He makes nations great, and he destroys them; he enlarges nations, and
leads them away.”

Slide 5 is a close-up of
the previous scene which captures the description of the Leviathan in Chapter 41
where he is portrayed as a fearsome creature with details of boiling pots,
flames coming forth from his mouth, and all the accompanying images used in the
pictorial visions of Hell.

Figures of Leviathan-like monsters
are not restricted to the Last Judgment.   They
also appear in more unlikely places in medieval Christian art.

Slide
6 is the Adoration of the Magi from the Church of Ste.-Trinite in
Anzy-le-Duc.
This rather unusual sculpture shows the three wise men
presenting their gifts with trumpets blowing. Mary and Christ receive them but
Maryís foot rests securely on the Leviathan creatures beneath her.

In Slide 7 we show a
portrayal of the Harrowing of Hell in which a Leviathan-like monster is often
shown.   This is a 14th
century silk from the Narbonne altar, currently in the Louvre.
It shows Christ on Holy Saturday rescuing souls, probably Adam and Eve,
from the mouth of the Leviathan.   To
the right is the famous Noli me tangere with Mary Magdalene and Jesus on
Easter morning.   Again the mouth of
the sea monster is symbolical of the devilís kingdom and Christ in effect has
to pry loose the vicious jaws to save the Old Testament souls.
In contrast to Job with his puny powers, Christ is often portrayed as
just the one to pierce the jaw of Leviathan with a hook.

One of the more graphic Last Judgments is Slide
8 which comes from Queen Eleanorís Apocalypse (1242-1250), now at Trinity
College, Cambridge.   You definitely
wouldnít want to meet this monster in a dark alley. 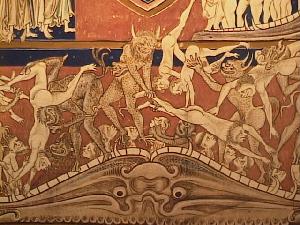 Up to this point, the figure of Leviathan has been
a devil-like figure who, like Satan, embodies pride both human and angelic.
This kind of sin can only be conquered by the patience of God.

In the Old Testament and the New Testament, as we
well know, the battle against pride and ingratitude is never-ending.
The social theory that comes out of the Bible and infuses the Middle Ages
is one that emphasizes intermediary institutions.
Families, guilds, universities, the aristocracy, the churchóall are
restraints upon the centralized powers that are beginning to arise in the modern
world.   But these intermediary
institutions must be constantly reformed so that they themselves do not become
worshippers of earthly power or overly desirous to dominate.

My interpretation of these developments follows the
lead of Robert Nisbet in his book, The Quest for Community, who has
traced this decline of intermediary associations from the medieval period to
Hobbes and finally to Rousseau.

The culmination of this rise of centralized power
states can be seen in Slide 9 which is the title page of Hobbesí Leviathan.
The name of the book is
ensconced in emblems to left and right showing secular power on the left and
religious power on the right.

In Slide 10, we see the
body of Leviathan with sword and bishopís crozier coming out of the soil.
Although it is hard to see, it is significant that Leviathanís body is
made up of individual persons.   Here,
the mystical body of Christ, which incorporated individual Christians as limbs,
is replaced by a purely human solution.
Thus the body politic takes on a new meaning.
According to Nisbet, “The modern StateÖis an inverted pyramid, its
apex resting upon the 1651 folio edition of Hobbesí Leviathan.”
(Nisbet, p. 129)   Hobbes
declares that intermediate associations within the State “were many lesser
Common-wealths in the bowels of a greater.”
He compares them to “wormes in the entrayles of a naturall man.”
In essence, Hobbesí Leviathan state concentrates total authority and
power in the center.
Hobbes is hostile to all the intermediary associations which
formerly had been the stuff of politics in the Middle Ages.
Even families are reduced to voluntary contracts and agreements.

As we move to Slide 11, we
make the transition to Rousseau and the French Revolution.
Here we see the Duke of Bedford displayed as the Leviathan.
The print is James Gillrayís The New Morality;–OróThe Promisíd
Installment of the High-Priest of the Theophilanthropes, with the Homage of
Leviathan and His Suite. August 1, 1798, for the Anti-Jacobin Magazine
& Review.   It was based on a
Poem by George Canning, the future Prime Minister, who in his turn based it on
Edmund Burkeís defense of his life against the attacks of the Duke of Bedford.
We see William Godwin portrayed as a donkey, Thomas Paine as a tailor,
and the Rev. David Williams as a marvelous snake.

Slide 12 shows
Larvelliere-Lepaux, one of the French leaders of the Theophilanthropes reading
from The Religion of Nature with the pillars of London Saint Paulís in
the background to journalists from the Morning Post and the Morning
Chronicle.

The final Slide 13 captures
the essence of the French Revolution and the thought of Rousseau.
Here we have the three “anti-graces” of justice, philanthropy, and
sensibility shown for what they are.   Justice
is on the left with the sagging breasts and Medusa type locks.
She carries daggers in both hands, has Egalite wrapped around her waist
while her foot tramples the scales of justice.

Philanthropy squeezes the world in
a mad embrace with the Ties of Nature and love of country at her feet.
And finally Sensibility sheds big tears over a dead bird in her hand and
a copy of Rousseau by her side.   Her
foot rests securely on the severed head of Louis XVI.
The unitary state has reached its theoretical apogee, and the symbol of
Leviathan has undergone its full transformation.
The horrors of totalitarianism of the Nazi and Soviet types in the 20th
century are only a more successful version of the French Revolution.

Now that you are familiar with the basic underlying types
of images, let us run the video.