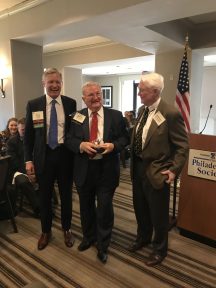 Morton Blackwell – My Kind of Conservative

I once remarked to Irving Kristol back during the early Reagan administration that it was more fun to be a conservative when we were all in the Catacombs, because we did not have to watch our backs … Being a conservative back then was not a career move!

“Now,” I said, “self-seeking opportunists have arrived, often elbowing good people out of the way usually only in order to advance themselves.”

He replied, wagging his finger at me, “You need those people!”

Well, perhaps.  But what libertarians and conservatives need far more than those people are individuals who serve the conservative movement first – not their own interests – like the Baron, John von Kannon, after whom this award was named.

Morton Blackwell’s motto, “I aim to build a movement, not an empire” is well known.  His mission has been to create principled leaders who could build winning majorities for the conservative movement.

There is not a single person on the right who has done more for our common cause than Morton. He has built his own organization, The Leadership Institute, into a talent factory which has trained and educated close to 200,000 future and current leaders in its 38 years – putting brains and muscle on the ground to advance conservatism in the public arena.

The Leadership Institute last year had annual revenue of $15.3 million and a full-time staff of 64 people. His Campus Reform student web site had 11.7 million page views in 2017.

I strongly urge everyone here to visit the Leadership Institute web site.  It is resource-rich both in political philosophy – much of it written by Morton himself … he has always been an avid participant in our sessions and also those of the Mont Pelerin Society, among other academic venues — and full of marvelous, practical, activist counsel.  You will be impressed!

But, in addition to his Leadership Institute work, Morton as a board member has also help guide the National Right to Work Committee to many great victories. He provided the initial idea for the creation of the Heritage Foundation. He has been the Republican Party national committeeman from Virginia since 1988 … a lone voice of sanity at the RNC.

Morton has tried relentlessly to change the RNC rules which were designed by the Beltway crowd to help well-funded Bush-Romney style presidential candidates win the nomination with only pluralities against divided conservatives in the late winner-take-all primaries. But he failed in that effort.

He then predicted – about two years ago — that these not-changed the rules would give us Donald Trump.  No one should ever dispute Morton’s political crystal ball.

Morton’s father once told him, “If at first you don’t succeed, try, try, try again. Then quit. Don’t make a fool of yourself.”  But Morton has kept trying at the RNC.  The Stupid Party’s establishment really ought to start listening, since my prediction is, Morton will keep trying, and not make a fool of himself.

Finally, there are a thousand anecdotes about Morton making his time and resources available to countless movement organizations.  Morton has shared his staff talent with many, for example helping them develop competent fund raising programs and much, much more.. He has mentored thousands of budding young conservatives, many of whom now serve in Congress and state legislatures, in journalism and in the now astonishingly widespread and reaching-deep institutions of our movement.  I could go on, but my time is up.  I will conclude with this:

Irving Kristol should have said, “We need people like Morton Blackwell.”

Morton, may we have a few words from you?

Members of The Philadelphia Society may submit nominations for The Baron Award in the form of a letter that fully explains the merits of the candidate proposed. The deadline for nominations each year will be December 31.