Introduction of Bruce Cole
Chairman, National Endowment for the Humanities 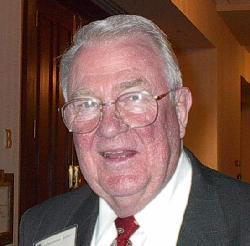 Regional Meetings of The Philadelphia Society always try to
draw on the region where we meet. Our
keynoter tonight, Bruce Cole, currently Chairman of the National Endowment for
the Humanities, exemplifies the artistic side of the city of Cleveland, the
Cleveland Museum of Art which some of you will visit on Sunday.
On Saturday, we shall explore the musical legacy of American Culture that
has such rich roots in classical music with the Cleveland Symphony Orchestra and
popular music with its new Museum of Rock and Roll.

In the case of Bruce Cole we have an even tighter
connection to the region. Bruce was
born in Cleveland, studied at Western Reserve University, and at Oberlin
College, not far from here. Now
some might worry that Oberlin is a radical college, but it is so radical that
telling a student to “conform” to anything at Oberlin is like telling a
chameleon to “conform” to a tartan plaid.

Bruce proceeded to receive his Ph.D. in art history from
Bryn Mawr College and from there to write brilliant books on all aspects of art
historyófree from jargon, obtuse theory, and cant about race and gender.
He confesses that many of the works of art he writes about are “old
friends whom I have long loved and admired.”
(The Informed Eye, p. 3) Old
friends are not something that one sets about to deconstruct.

I suspect that there are many here tonight whom Bruce would
consider an old friend and many younger persons who have long loved and admired
the great work that he has produced during his long tenure as a Professor at
Indiana University.

In fact, his approach is consistent with the themes of
sound jurisprudence that have been at the heart of my concerns for many years.
In discussing Piero Della Francesca’s art he said he wanted to know
where it “originated” and wished to “investigate the structure of its
linked form and content,” to “describe what its influence was, and to ponder
its meaning.” And to what purpose is all this investigation?
The ability to be “innovative within the framework of tradition”
which is foreign to “twentieth-century concepts of art.” It is precisely
this mix of tradition and innovation that Russell Kirk understood to be the
hallmark of conservatism properly understood and that continue to spark the
meetings of the Philadelphia Society to this day.

Bruce generalizes that “Renaissance artists were deeply
conservative, and their art was strongly dependent on the past.
They also considered the end purpose for which the religious and secular
works they painted were to be used. Such
conservatism did not, however, stop Renaissance artists from being highly
original.” (p. 26) The end
purpose was the greater glory of God and not some hidden agenda of hegemony by
gender or race.

In his excellent book accompanying the Art of the Western
World television series, Bruce makes a similar point about the paradox that the
great Renaissance painter, Raphael, showed both great respect for the past and
was, at the same time, highly inventive. (p. 148) “Although it may seem
paradoxical, no Renaissance artist demonstrates more respect for the past work
nor was more inventive than Raphael.” He calls this “creative borrowing.”

Things aren’t much different in the area of
twentieth-century jurisprudence. Would
that our judges and jurisprudential thinkers had such respect for the
Constitution. I present to you, Bruce
Cole.

Thanks for those who helped organize the meeting.

These meetings don’t take place by magic. I would
especially like to thank our Secretary, Bill Campbell, and Julie Flick for
making all this possible.

In organizing this meeting Bill Campbell and I drew on many
persons for speakers, scholarships and guests.
Particular thanks go to Ken Cribb at ISI and Mark Henrie and Paul
Rhein on the ISI staff who went out of their way to provide names for
scholarships and assessments of speakers

At the Liberty Fund George Martin was helpful as usual.
Special thanks go to Steve Ealy who is responsible for several of our
speakers and many of our scholarship guests.

Larry Arnn, President of Hillsdale College, was very
generous in supporting this meeting. Special
thanks must go to Professors Mark Kalthoff and David Whalen at Hillsdale College
who organized, identified, and transported the outstanding group of Hillsdale
students.

Peter Schramm at the Ashbrook Center supplied many names
and David Forte was our man on the ground in Cleveland who first alerted us to
the Cleveland Symphony’s production of Haydn’s The Seasons on Saturday
night.